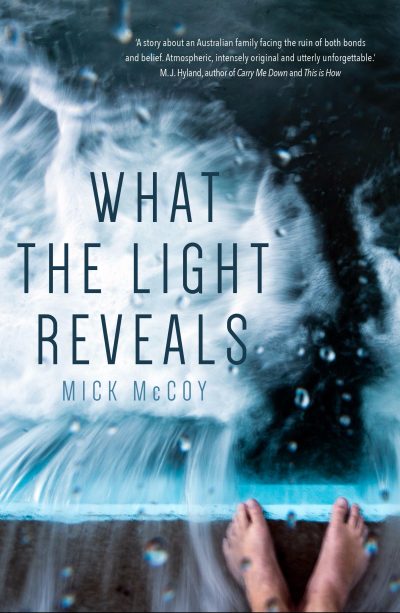 What the Light Reveals will be released by Transit Lounge in March 2018.

‘A story about an Australian family facing the ruin of both bonds and belief.  Atmospheric, intensely original and utterly unforgettable.’

M.J. Hyland, author of Carry Me Down and This Is How

‘McCoy has given us that special thing: a powerful, singular vision of the complexities faced by individuals existing alongside each other as a family. This novel is beyond good storytelling: it is taut, evocative and sensationally unique.’

Sarah  Schmidt, author of See What I Have Done

‘An Australian family living in Moscow during the Cold War. Where is home, what is a family and what does it mean to belong? What can be revealed and what is better concealed? A novel about secrets and lies, guilt, loyalty and betrayal and the urge for survival.

‘Haunting, compelling and memorable, Mick McCoy’s novel has all of the moral complexity and the psychological intensity of an Ian McEwan novel.’

Antoni Jach, author of The Layers of the City and Napoleon’s Double

In an increasingly divided and intolerant world, What the Light Reveals is a beacon: a novel that brilliantly captures the sometimes devastating consequences of individual belief. Conrad is an Australian who is wrongly accused of passing military secrets to the Russians. His life and that of his family is turned upside down by discrimination and fear. Unemployed, misrepresented by the media, betrayed by relatives and threatened by strangers, Conrad sees no choice but to uproot his family from their homeland to start a new life in Moscow.

This is not just Conrad’s story however, but also that of his wife Ruby, his adopted son Alex, and biological son, Peter, and of the tension and intrigue that confronts them and shapes their lives in another country. Russia lives and breathes in McCoy’s superb evocation of it, but Australia is never far away. As Peter says, ‘Tell me again why we’re still here?’ This is a book about exile and the need to belong and about what a family is and why we all need one.

Told with suspense and rich in characterisation and surprising plot twists, What the Light Reveals is compelling in its depiction of a family caught between two cultures and its championing of the small people of this world. As Conrad’s family fractures, doubt and blame replacing trust and forgiveness, one wonders where or how it might be brought back together. In crisis, will love restore the bonds of family or tear it irreparably apart?

5 thoughts on “What the Light Reveals”